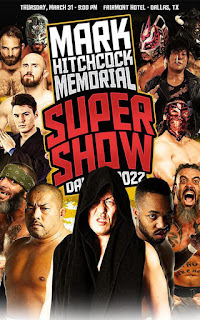 Ian Riccaboni and Veda Scott are the broadcast team.

Bandido pinned Speedball Mike Bailey after the Moonsault Fall Away Slam off the top rope. Fans gave them a standing ovation and threw money on the ring.

Bret Hart was introduced as the special guest ambassador for the show. He came out to the stage and spoke very briefly. He thanked the fans for coming out and told them to enjoy the big pro wrestling weekend.

Taya Valkyrie pinned Johnny WrestleCon (John Hennigan) after a curb stomp on a kitchen sink in a Loser Does The Dishes For Life Match. Pans of dishes were brought to ringside to be used as weapons. Johnny got on that mic towards the end of the match and said they used everything on each other but the kitchen sink. He asked Parrow to come out from the back and bring him a kitchen sink to use. Parrow did come out with one. After the match, Hennigan said he loved her. They kissed and walked to the back.

Jushin “Thunder” Liger came out as a special guest.

Carey Silkin has joined on commentary.

Atsushi Onita, Ricky Morton, Robert Gibson, Juice Robinson, and Colt Cabana (with Super Leather) beat PCO, NZO, Jimmy Wang Yang, Barry Horowitz, and Dirty Dango when Onita pinned Dango after kicking a chair into his face followed by a stunner. Onita sprayed Yang with red mist after the match and beat him up.

Summer Rae came out to the ring and danced with Dirty Dango.