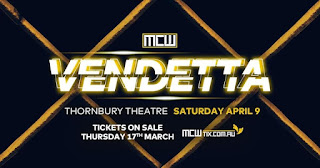 MCW World Champion Mitch Waterman came out to the ring. His leg was in a boot and he told the crowd he’s injured. He said management told him to vacant the title but he refused. He said he will defend the title on the show next month. The next show is May 14.

Jake Andrewartha pinned Mars Morgan after a gut wrench powerbomb in an Ascension Tournament B Block Match. The winner of the tournament gets an Intercommonwealth Title shot.

Hector Jones and Tom Crowe interrupted the show and cut a promo. They said they’re not supposed to be on the show and have been cast aside. They demanded a match against The Bastard Brothers right now. Krackerjak appeared on the video screen. He said he has COVID so the requested match can’t happen but he was sending in another team to face then instead. Big Dave and Rickie Gilmore came out.

It was announced that MCW Intercommonwealth Champion Royce Chambers wasn’t medically cleared. This is the second show without him defending the title and therefore management decided to strip him of it. A match will take place immediately for the vacant championship.

The cage match main event is next with pin, submission, or escape as the rules.

Slex beat Rocky Menero in the cage match. They were both climbing out of the cage at the same time side by side. Slex rammed Menero’s head into the cage then dropped down to the floor for the win. Menero was bleeding heavy from his head all the way down to the front and back of his body.