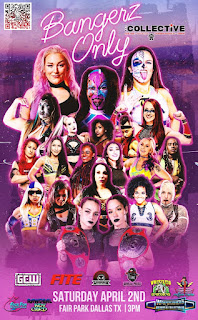 Allie Katch pinned JP Harlow after the Bussy Driver. Ayla Fox came out with Harlow as his manager. She tried to interfere but it backfired.

Jody Threat pinned La Rosa Negra by rolling over Rosa’s frog splash into a cover. This was the first MPW win for Threat and it’s considered an upset over the first MPW Champion.

Jazmin Allure and MPW Tag Team Champions Robyn Renegade and Charlette Renegade beat Laynie Luck and NWA Women’s World Tag Team Champions Allysin Kay and Marti Belle when Allure pinned Luck by illegally using feet on the ropes while everyone else was brawling outside the ring.

Thunder Rosa pinned Trish Adora while Adora was in the choke hold finisher. The referee counted to three while Adora looked like she submitted at the same time. The official decision was announced to the crowd as a pinfall.

MPW Champion Holidead pinned LuFisto in a No Disqualification Match after a running spinebuster into a door set up in the corner of the ring.

After the main event, Holidead called the locker to the ring. She said LiFisto is a legend and took her to the limit. She said MPW and women’s wrestling have come a long way. She thanked SHIMMER, Dave Prazak, Lenny Leonard, and LuFisto for paving the way. She said women are no longer the bathroom break and pop corn matches. She thanked everyone for their support.

April 16 is the next MPW show in San Antonio at the Salvation Army.