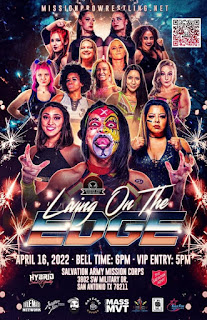 JP Harlow won a 3-Way Match over Kenzie Paige and Ruby Raze by pinning Page after Raze gave Page a belly to back piledriver. Harlow kicked Raze out of the way and quickly covered Page to steal the win. He had a new manager by the name of Joey who interfered during the match.

May 14 is the next MPW show back at Southern Star Brewery in Conroe, Texas.

MPW Tag Team Champions Robyn Renegade and Charlette Renegade beat Ava Everett and Davienne by pinning Everett after The Renegades Revenge double team finisher. The Renegade Twins are fresh off of their impressive performance on last night’s live AEW Rampage on TNT. Robyn lost to Ruby Raze in an Owen Hart Women’s Tournament Qualifier while Charlette tried to switch places in the ring with “twin magic.” Everett is back in America after spending a lot of time on tour in Europe this year. She was working regularly for Germany’s wXw and she even won their Women’s Title while there from Iva Kolasky in early March. She lost it to Baby Allison in a 3-Way Match that included Iva Kolasky a couple of weeks ago.

The main event is next for the MPW Title. It’s a Fatal Four Way with the rules of two in the ring at once and they can tag the others in.