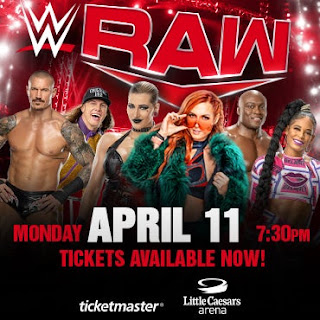 A local ad for WWE Monday Night Raw in Detroit on 4/11/22 at Little Caesars Arena aired tonight during WWE Friday Night Smackdown on Fox 2 Detroit. The dark matches promoted were Roman Reigns and The Usos vs. Drew McIntyre and The New Day, and Cody Rhodes in action.

Back in February the locally announced dark matches for this Raw were Randy Orton and Riddle vs. Chad Gable and Otis, and Becky Lynch vs. Bianca Belair vs. Rhea Ripley.

W.W.D. has learned WWE is scheduled to be back in Detroit on August 26 for a live WWE Friday Night Smackdown on Fox. The company will have their usual traditional holiday houseshow tour stop in Detroit on December 28.