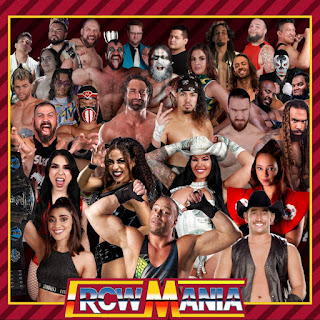 Carolina Teague is the ring announcer. Brandon Oliver and Javi Perez are the broadcast team.

RCW Women’s Champion Madi Wrenkowski pinned Ki Vibez after the Jazz Stinger. It’s probably a safe bet that this match was first because Wrenkowski is booked for Thunder Rosa’s Mission Pro Wrestling show scheduled for 4pm EST at Fair Park in Dallas. It will be broadcast over on FITE.

Cam Cole won a 3-Way Match over Diego Renay and Branden Vice after a double low blow to get the pin Renay.

Kaun went to a time limit draw with Westin Blake.

Alejandra Lion and RCW Tag Team Champions Lou Gotti and Angel Camacho (with Nastico) beat RCW Phoenix Champion Christi Jaynes and The Pillars of Destiny (Hunter and Titan) when Camacho pinned Jaynes after the Camacho Bomb. The heels delivered a knock out blow to Jaynes to set up the finisher.

Don Juan, Chris Marval, RCW International Champion David Kidd, and Katie Forbes (with RVD) beat “King” Rob Love, Anthony Andrews, Casey Blackrose, and Jazzy Yang (with Jimmy Wang Yang and Jess E. James) when Forbes submitted Love to what look like a Muta Lock set up by a punch from RVD outside the ring on Love.

The internet connection at the venue was lost for a little while at the start so we missed a few thing. Thanks to Title Match Network for sending the results to us.