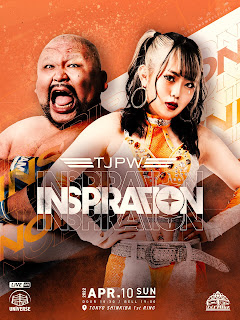 Princess of Princess Champion Shoko Nakajima came out to the ring and told the crowd that she will not be at some upcoming TJPW events  this month because she is going to the UK. She will be on EVE's "Global Women Strike 3" event on 4/23/22 in London at 229 The Venue which will air live on YouTube.

Miyu Yamashita pinned Kaya Toribami after the Attitude Adjustment in 7:03.

Yuka Sakazaki beat Moka Miyamoto by submission with a wrist lock in 11:25.

Marika Kobashi and Abdullah Kobayashi beat Antonio Honda and SAKI in 17:29 when Kobashi pinned Honda after the springboard bulldog finisher followed by a Bakachinger elbow drop from Kobayashi and then a Bakachinger elbow drop of her own. (I erroneously initially reported that this was going to be the main event. I apologize for the error.) SAKI came out wearing her half of the International Ribbon Tag Team Titles. She and Hikari Shimizu are currently the champions in Ice Ribbon. She managed to bodyslam Kobayashi in the match. Kobashi’s final TJPW match and in pro wrestling is on 4/17/22 at Ryogoku KFC Hall. She has previously said she leaves the door open for a possible return in the future.

Rika Tatsumi beat Suzume by submission with the Dragon Sleeper in 13:32.