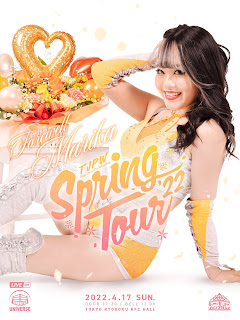 This is event is the final day in the company and in pro wrestling for Marika Kobashi. She will be in the main event against twenty others on the card in a Handicap Match. She previously said that she wants a break but she will leave the door open to possibly return to pro wrestling one day.

Yuka Sakazaki and Mizuki beat Maki Itoh and Haruna Neko when Sakazaki pinned Neko after the Magical Merry Go Round.

They announced Tokyo Princess Cup 9 will begin on 7/16/22 with the first three dates here at the venue. The finals are on 8/14/22 at Korakuen Hall.

Marika Kobashi vs. everyone else on the card is up next. Kobashi came out after everyone else was introduced and she got the streamers send off. They haven’t been doing that too much since the virus pandemic started. This is a best of five falls match with no time limit.

Raku lead everyone else to pile on top of Kobashi for the pin to win the first fall.

TJPW GM Tetsuya Koda got dragged in the ring very reluctantly. Kobashi pinned him and that counted as a first fall victory for her.

Raku submitted Kobashi to a front neck lock. The hold was Kobashi’s finisher before she started using the springboard bulldog.

Miyu Yamashita pinned Marika Kobashi after the Attitude Adjustment to win the match for the roster. Now begins the graduation ceremony.

Yamashita was crying and gave Kobashi a bouquet of flowers. Nakajima gave her what looked like a scrap book.

Kobashi gave a tearful departure speech and it was very sincere. She said she started wrestling at 14 and now it’s been 7 years. She thanked the roster and told them they are her friends who helped her and made her strong. She emphasized that she is not retiring and she will not be going to another promotion. She said she wants to explore other things in life. She said if she ever comes back to pro wrestling it will be back here with TJPW. She said when she started they were running shows in small venues and now they have grown so much. She thanked everyone for her 7 years.