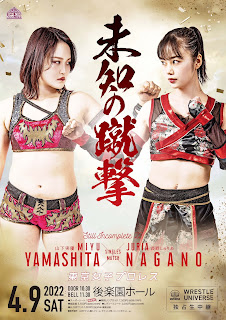 Miyu Yamashita pinned Juria Nagano after the Skull Kick in just a few minutes. This was only the second match for Nagano and her first singles bout.

Marika Kobashi pinned Raku after her springboard bulldog finisher. This was the last Korakuen Hall show for Kobashi. She teams up with Abdullah Kobayashi tomorrow on the TJPW Inspiration event from Shinkiba 1st Ring vs. SAKI and Antonio Honda. That show air at 6am EST on WRESTLE UNIVERSE. She will graduate from TJPW and from pro wrestling on 4/17 at Ryogoku KFC Hall. No card has been announced yet for that show.

Princess Tag Team Champions Yuka Sakazaki and Mizuki beat Suzume and Arisu Endo when Mizuki pinned Endo after the diving double stomp set up by Sakazaki’s Magical Girl Splash. After the match, Hikari Noa and Nao Kakuta came out to be the next challengers. It will happen on 5/3 back here at Korakuen Hall.

Princess of Princess Champion Shoko Nakajima pinned Yuki Aino after the diving senton. Nakajima got on the mic and gave Aino respect. She told her to keep moving forward. They shook hands then Aino walked to the back. Hyper Misao came out to challenge. Nakajima agreed. Misao kicked her and gave her a stunner then walked to the back. The two are tag team partners and friends.