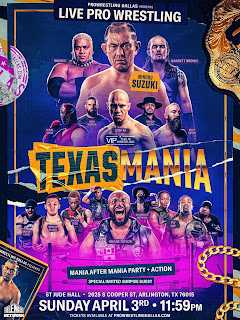 Nigel Rabid and Big Plo are the broadcast team.in the ring announcer.

Chandler Hopkins pinned KC Navarro with a inside cradle after a series of reversals. The ropes broke during the match and they had to take a brief intermission after.

Reality of Wrestling Heavyweight Champion Mysterious Q pinned Ryan Davidson by illegally using feet on the ropes. There is just a top and middle rope now because of the ring issues.

The ropes are now fully repaired with all three back on the ring.

VIP Champion Shane Taylor pinned Low Ki after a package piledriver. The original referee was accidentally squashed in the corner by Taylor then Lou Gotti ran in as a heel referee who refused to count when Low Ki had Taylor pinned.