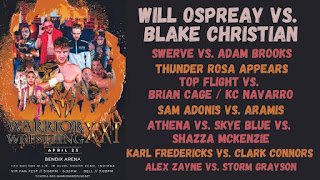 Rich Bocchini and Val Capone are the broadcast team.

Karl Fredericks pinned Clark Connors with a cradle in a NJPW Strong Dojo Showcase Match after several minutes of back and forth action. WW is now in a partnership with New Japan Pro Wrestling to have one of these themed showcase matches on each show.

The next shows are: May 28 in St. Louis, Missouri. June 18 in Grand Rapids, Michigan. July 23 back in Chicago Heights, Illinois with the start of the Stadium Series each month for the rest of the summer.

The ring crew set up a podium in the ring for a press conference with Frank The Clown. He said he is still owed a WW Title shot whenever he chooses. He said it may or may not be tonight. He called himself Mr. Warrior Wrestling who has been with the group from the first show to show #21. He said he has a contract to represent someone new. It was Storm Grayson. He told Grayson that being under his management will assure him main events and championships. He said they will destroy the company by taking the title and the plan begins tonight.

Frank took questions from members of the press in the ring. The final person asked him if he planned to add more people to his stable. He said it was a good question and brought out his first female client Shazza McKenzie.

Storm Grayson pinned Alex Zayne with illegal assistance from Frank The Clown on the outside holding Zayne’s feet down. Zayne tried to go after them after the match and Calvin Tankman came out to back him up. Tankman turned on him with a knockout punch and joined Frank’s stable.

Dante Martin and Dante Leon beat Brian Cage and KC Navarro when Leon pinned Navarro after a swanton bomb. Another miscommunication occurred between Cage and Navarro. They got into a shoving match afterwards with Cage getting the better of it.

Val Capone went down to the ring for the title relinquishing segment with WW Women’s Champion Thunder Rosa. She’s scaling back on her indie dates due to her commitments with AEW. She is currently the AEW Women’s Champion.

Rosa thanked the fans for coming out. She said she sees some of the same fans at every WW show and she knows it’s a big commitment to support every show. She said it is hard to give up the title tonight. She also announced that this will actually be her last indie show for a while. She said she would not be able to defend the title at the moment so she wants to let someone else have a run with it. She thanked management and the fans for supporting her career. She laid the title belt in the middle of the ring and tipped her cowboy hat to the crowd. She then walked over to do guest commentary for the deciding match for the now vacant title.

Athena won the vacant Warrior Wrestling Women’s Title in a 3-Way Match over Shazza McKenzie (with Frank The Clown) and Skye Blue by pinning McKenzie after the Eclipse. Frank repeatedly interfered. Athena gave him a DDT and drop kicked him out of the ring after the match.

Warrior Wrestling Champion Will Ospreay pinned Blake Christian after the Storm Breaker. Bocchini said this was the best match he’s seen in the last two years. Ospreay will defend next against Davey Richards on May 28 in St. Louis. He cut a promo to hype the match. KC Navarro tried to jump him from behind and cash in the title shot medallion. Brian Cage ran in and dropped Navarro. He said Navarro’s next match will be against him and not Will Ospreay.