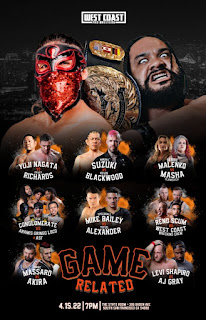 Midas Kreed, D-Rouge, and Alpha Zo beat Gringo Loco, Arez, and ASF when Zo pinned ASF. Scott said Aramis couldn’t make it and he was replaced by Arez at the last minute.

Titus Alexander pinned Speedball Mike Bailey  with a driver shortly after poking Bailey in the eyes when Bailey tried to give him the Flamingo Driver.

Masha Slamovich pinned Debbie Malenko after the package piledriver. They got a standing ovation after. The crowd chanted “Please Come Back!” at Malenko. Malenko came out wearing her All Japan Women’s Pro-Wrestling jacket with her name on the back and the classic AJW logo on it.

West Coast Pro Champion Jacob Fatu pinned Bandido after the Killing Moon. Lots of high impact moves exchanged. Bandido managed to give Fatu a press slam which brought the crowd out of their seats. After the match, Fatu said wrestlers have to go through a lot of sacrifices and he missed a family event to be here tonight. He thanked Bandido for the match and the crowd for coming out.