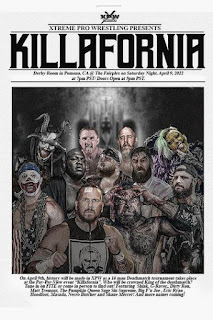 This show features a single elimination Death Match Tournament to crown a 2022 XPW King of The Death Match Champion.

Rob Black came out to come to the ring to greet the crowd. He said they are back and they’re going to take back what is theirs. The crowd is super loud and it’s hard to hear everything is he said. He brought out fellow AVN Hall of Famer Jasmin St. Claire, Veronica Caine, Vic Grimes, and Angel for a memorial tribute to Supreme who passed away in 2020. He then had tonight’s roster come out to surround the ring for the 10-Bell Salute for Supreme.

Silas Young pinned Brawlin’ Bo Cooper after a low blow in a non-tournament match. Young cussed out the crowd before the match and told them they didn’t know real pro wrestling because all they want to see is bloody death matches.

High Pitch Will came out to the ring with his keyboard. He sang a song for the crowd off key and high pitch. He said the keyboard stopped working and asked if anyone had any C batteries for it. Pogo The Clown came out with a shovel. He took his time getting in the ring then he beat up Will with the shovel.

Kat Martini came out to ringside and introduced Taya Valkyrie. She said Valkyrie is the first XPW Women’s Champion. Kamille came out to confront Valkyrie and she had the NWA Worlds Women’s Title around her waist. She was offended that Valkyrie was automatically declared the champion without facing anyone for the title. Her promo was hard to hear but she mentioned a June 25 return date. They ended up having an impromptu match.

Kamille went to a No Contest with Taya Valkyrie after Kat Martini kept pulling the referee out of the ring each time Kamille tried to pin Valkyrie. No official decision was announced but the referee signaled with his arms to Martini and Valkyrie like the match was being waived off and “thrown out.”

The Death Match Tournament begins now. Play by play announcer Kriss Kloss said “anything goes”. The ring crew was setting up a bunch of stuff to be used as weapons around the ring.

Orin Veidt pinned Vincent after Total Anarchy into a pile of thumbtacks. They used a ladder and a table wrapped in barb wire. Veidt slammed Vincent into the table during the match.

Sage Sin Supreme pinned Sledge with the Code Sin. They used bats covered in thumbtacks and barb wire and chairs as weapons.

Eric Ryan beat Juicy Finau by referee stoppage after stabbing Finau in the head with a fork. They had boards covered in barb wire in all four corners of the ring as some weapons for this one. Finau cannonballed into a pane of glass when Ryan moved out of the way.

SHLAK pinned Dirty Ron after his flaming elbow drop off the top rope. This was a blood bath. They used light tubes, a chair wrapped in barb wire and a door as some of the weapons.

Pagano pinned Shane Mercer after driving him off the top rope into a door set between chairs in the ring. They put each other through panes of glass early on in the match.

Necro Butcher pinned Hoodfoot after a DVD into a table set up in the corner of the ring. Necro was bleeding badly from his eye almost and back from the start but he gave the crowd a big thumbs up after the win. The cameras got a close up of Hoodfoot bleeding from his head onto pieces of broken glass afterwards.

Masada pinned Lucky 13 after a knee lift into a chair set up in the ring. The main weapon throughout most of the match was cinder blocks.

Big Joe pinned Terex after a senton with light tubes over Terex (the light tubes didn’t break at the finish). Lots of rapid fire light tube shots from Joe especially at the finish. Joe was dressed in all white and he was blood soaked at the end. This was the final match of the first round. The show started at 10pm EST and this match began at 1:50am EST. Terex’s back was all bloody with pieces of light tube stuck in him as he walked to the back.

SHLAK pinned Eric Ryan after a spinebuster on a chair.

Big Joe beat Necro Butcher by referee stoppage/knock out after a rapid fire series of punches in just a couple of minutes. A fan threw something at Joe after the match. He was still in blood soaked white shirt. More stuff was being tossed into the ring from fans as Joe walked to the back and Necro was laying knocked out in the ring.

Kris Kloss said a couple of fans ended up getting ejected.

Masada pinned Pagano after a piledriver. They were brawling outside for a couple of minutes. Pagano set Masada up against a table on the guardrail then went for a dive out of the ring. Masada moved out of the way and Pagano crashed into the table hard with his legs smashing into the guardrail.

The semifinals are coming up at 3:10am EST. The ring crew is setting up several light tubes between the ropes on all four sides of the ring like you would see in Big Japan matches.

SHLAK pinned Sage Sin Supreme after a powerbomb head first into the seat of a chair set up in the ring. Fast paced match with both of them grabbing all of the light tubes from off the ring to trade shots over each other’s head. The fans were a little disappointed that Supreme was eliminated from the tournament as the underdog.

The ring crew cleaned up the ring and set up a fresh batch of light tubes on the ropes for the next match.

Masada beat Big Joe by referee stoppage by choking him out into unconsciousness with a chair around his neck.

The tournament finals are next. Kloss said they can use “anything left in the house” as weapons. The ring crew is taking down all of the ring ropes and putting up barb wire in place. There are stacks of light tubes in the ring. Tables are set up on the floor with stacks of light tubes and cactuses on top of them.

The tournament trophy was brought out to show the crowd.

SHLAK pinned Masada after suplexing him into a table set on fire to win the tournament. An attractive buxom woman who had been excitedly cheering SHLAK on all night in the front row ran in and handed him the lighter at the finish then celebrated with him after. He got on the mic and said “Fuck Rob Black! Fuck This Company! Fuck This Trophy!” He wanted a Championship belt instead and he ended up destroying the trophy. He stormed off to the back as the unnamed woman danced around him with delight.

To give an idea of how long this show was: GCW had a show in the Los Angles area tonight. It started an hour after this show and ended a couple hours earlier. Fans could have gone from GCW to this show and they would have made it in time for the semifinals. This show ended at 4:40am.