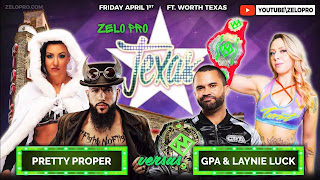 Zelo Pro Wrestling results from Ft. Worth, Texas, USA 🇺🇸 at Ridglea Theatre on 4/1/22 live and free on YouTube:

Blair Onyx immediately challenged Missa Kate for the medallion. Onyx won the match by referee stoppage with the Spider Lock hold to win the medallion.

Chelsea Green appeared on the screen and said she wasn’t going to be at the show because she had better things to do (she has commitments with Impact Wrestling tonight). She had a replacement. It was Alex Gracia.

Big Jon Crowley and Swoggle won a 3-Way Tag Team Match over Doc Simmons and Zach Hendrix … Chucho and Jay Manny … when Swoggle pinned Chucho after a chokeslam followed by a splash.

Shazza McKenzie pinned Hyan after the Shaztastic Stunner and repeated interference from Frank The Clown who was managing her.

Zelo Pro Women’s Champion Laynie Luck and Zelo Pro Champion GPA beat Lady Frost and Victor Benjamin when Luck pinned Frost after using the women’s title as a shield to block Frost’s Moonsault. GPA slid the belt to Luck from the outside ringside then distracted the referee at the finish.